Before writing this review, I shot and edited a short gameplay video with no voiceover to put on YouTube as an experiment. Immediately after uploading, it was flagged for content ID on the game’s soundtrack, despite Abbey Games insisting that the game could be streamed, recorded, and even monetized for Let’s Plays. So that kinda sucks. Maybe I’ll attempt an update once I do more research and practice my editing skills. I’d love to do video reviews along with the written blogs.

Okay, okay, after my Backstage Tale about god games, you probably think I have a purposely narrow view of what a god game should be. I really only have my personal definition of a god game (you know, ‘miracles’, a dividing line between minion behavior and player direct control, and perhaps a bit of terraforming) because I wish to see other games of this genre succeed.

Expanding on the subject, there’s something intriguing between having world-changing powers but no control over your subjects. You could see it as giving mortals ‘free will’. A natural conflict between the player and pre-defined NPC behavior arises immediately. This lack of player control can become immediately frustrating, as I illustrated in my previous article about the game Black and White and its giant creatures. Even with proper AI programming, minions are nearly guaranteed to annoy the player if given too much independence. Perhaps the most difficult comment any god game designer could hear a player make is: “I could get this done a lot faster if I could just control them.”

Of course, games can be fun with a lack of control. Just ask anyone who’s played on a slot machine. There’s that issue of balance again: on one side, you win or lose by complete chance (or RNG), and on the other, it’s simply a strategy game where the player controls everything. So, what’s the middle ground?

Just a bunch of giants on a barren world, full of potential. Nothing big.

Just Me and My Fellow Giants

Developed by Abbey Games, Reus is a two-dimensional god sim/strategy/puzzle game where the player isn’t a god exactly. Instead, the player controls four giants with god-like powers: a forest ent-like giant, a rock giant, an ocean crab giant, and a fungal ‘spore’ giant. These giants all have abilities to create different biomes across a circular worldspace: oceans with the crab giant, deserts and mountains with the rock giant, forests with the forest giant, and swamps with the fungal giant. Once the biomes are in place, the giants can lay down resources like plants, minerals, and animals that vary between biomes. With enough resources planted down, humans will settle into villages and towns, claiming the resources you lay down. You have no control over the behavior of these humans, including how they’ll react to neighbors and even towards the giants themselves. Initially, the goal of the game is to complete the different eras, helping the humans grow their settlements. Besides the eras, there are 30, 60, and 120-minute games where you can complete challenges ranging from simple to remarkably difficult.

There are three basic types of resources: food, wealth, and tech. Food can come from elderberries (which your father smelt of), mackerel, and pears. Wealth can come from beaver (their hides, I assume), agate, and quartz. Tech can come from peppermint, ginger, and dandelions. This is just a few of the many types of resources your giants can lay down: there are over 100 different types, all with their own bonuses or ‘symbioses’ (for example, chickens produce more food if placed next to a blueberry plant). In order to ‘transmute’ a resource into a more advanced one (such as changing tech-based agate into more versatile salt), your giants can use ‘aspects’ which also act as a resource boost (to change agate into salt, you need to have your rock giant use ‘seismic aspect’.

On top of this, every resource can be granted multiple aspects, and even more so if those aspects are ‘potent’, ‘greater’, or ‘sublime’. The forest giant can use an ability called ‘fertility boost’ to increase the chance of higher quality aspects. This also happens in locations that have a higher ‘natura’ rating. Most plants grant ‘natura’ naturally. 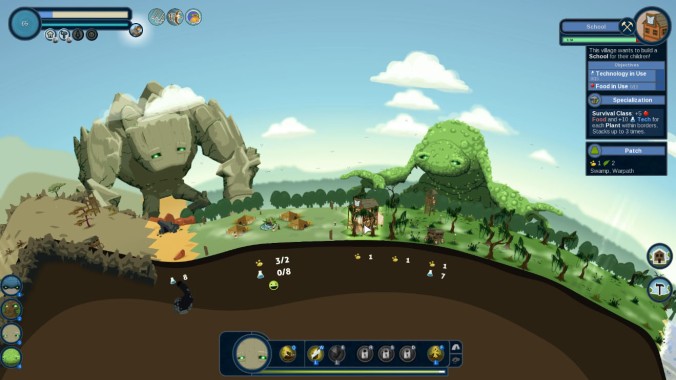 A tiny bayou town living under the shadow of a giant rock and the living embodiment of hay fever.

This is all to help your villages complete special projects that, when completed, will grant your giants human ambassadors which will upgrade your giant’s powers based on which biome the ambassador comes from. These unique projects grant big resource boosts, like granaries providing food, toolshops providing wealth and tech, etc. These projects themselves can be upgraded multiple times, each with more complex resource and situation requirements than the last.

But wait, there’s more! Your giants can provide a lot of resources very quickly, but if you give a village too much too quickly and not include resources that also provide a resource called ‘awe’, your villagers will soon grow discontent in their prosperity and attack nearby settlements and even your giants. That’s right, your giants are vulnerable creatures. Each has a life bar and can ‘die’ at the hands of tiny Kratos-like warriors. If you lose a giant, they return to sleep in the earth to recover and you will no longer have access to their powers for the remainder of the era. With multiple villages established, you’ll be herding cats to make sure villages don’t kill each other or your giants before you can help them all complete their projects for the essential ambassador upgrades.

Bummer. Good thing the rock titan can cause an earthquake that will topple the largest villages and towns into oblivion if they get too uppity. You can use the crab giant to sink a village into the ocean. If desperate, the fungal giant can lob giant balls of swamp goo at attacking armies.

Too Fine a Balance?

This is where Reus attempts to draw the fine line between chance and control, with ‘attempts’ being the keyword. While you can’t directly control what your villages do to your giants or to each other, you can use ‘awe’ to calm them, remove ‘awe’ to provoke them, or invoke the ‘clean slate’ protocol by quaking or sinking them. (Some high-end project upgrades like the level 3 Historic Point require that village to destroy the closest nearby village, for example, so some war is useful.)

On paper, this seems simple. Unfortunately, since you have no say on what your villages end up building for their projects, and since many of the challenges hinge on the creation of certain projects, and since it’s pretty RNG which other villages your villagers make peace or war with, Reus seems to fall off the balancing wire into a game of chance once you’re on the hunt for challenge completions. Increasing your giants’ ability to control the environment (and, accordingly, the humans) takes a lot of practice and memorization.

I’ve gotten lucky with resource symbiosis once or twice where I created a good enough amount of ‘awe’ to stop a war. But it didn’t happen often, and I couldn’t tell you which resources I used to accomplish it. It seems like resources with useful amounts of awe are few and far between, or are reserved for higher-level transmutations. And those higher-level transmutations are entirely dependant on upgrading your giants with the right projects from the right villages in the right biomes with the right resources that don’t go to war with each other or end up hating your giants.

It’s kinda hard to tell, but there are tiny soldiers on that mountain, and they’re throwing spears at the swamp village. Look at Rocky’s face. Rocky isn’t mad, just disappointed.

A Puzzle of Many Colors

This is another game I often come back to because it’s so easy to pick up and play. But it’s hard to master. Maybe not hard, but time-consuming. If you don’t know your end goal, you’ll waste a lot of valuable time making, upgrading, smashing, and remaking resources until the right symbioses happen. Worse, even if you do know your end goal, there’s a chance your aspects won’t be potent enough for upgrades, which leads to more resource remaking.

The game falls into a pit I affectionately call Blind Crafting Syndrome: even if you’ve crafted it before, unless you’ve memorized the recipe, the game won’t give you a clue on how to repeat it. While enjoyable with no prior knowledge, Reus is frustrating to return to after time away. Reus doesn’t quite have a crafting system like Minecraft or My Time at Portia, but there are so many different combinations and requirements of resources and aspects and biomes that it requires an immense amount of trial and error to complete the higher-level challenges. If Reus had some type of planning tool you could use before laying down a resource, or even an in-game encyclopedia, it would help immensely.

Your giants are incredibly pondering and slow creatures as well (I guess they should be). Managing an entire world, even a small or medium-sized one, takes a lot of travel time and planning. All the time while playing, I would have a sinking feeling that I was doing something out of order or inefficiently, but I didn’t want to have to look up online someone else’s ‘correct’ answer. Maybe it’s my anxiety of time limits and incredible challenges, but all the time-wasting trial and error (mostly error) dulled the game for me. This game should be casual and relaxing. But it’s not. Yes, there is an endless mode, and I could practice my Reus skills. But you can’t complete challenges in ‘alt’ mode. No, I would probably head to the Reus wiki or the Steam guides for help to figure out a game plan for finishing a particular challenge in the timed game.

I would, that is, if I had an intense desire to continue to play.

Reus is another indie game that looks simple, colorful, and inviting at the beginning but by the endgame becomes a very challenging strategy/puzzle game. A bit too much into the puzzle genre for me. In fact, to me, it feels a lot like a 1000-piece jigsaw puzzle. I get why people enjoy putting them together, and I’ll find joy in locking a few pieces together here and there (hence why I’ve played Reus on and off through the years since its release). But I don’t have the patience to put the whole thing together.

While not wholly applicable, this one, in particular, came to mind.